After having bought the latest Humble Bundle, one of the included games that I wanted to try was Awesomenauts. Simply put, Awesomenauts is a MOBA-like experience in a 2d scenario with a action-focused mentality.
Contrary to games like League of Legends and DOTA, here you have no auto-attack and you move with the arrow keys like a normal platformer. 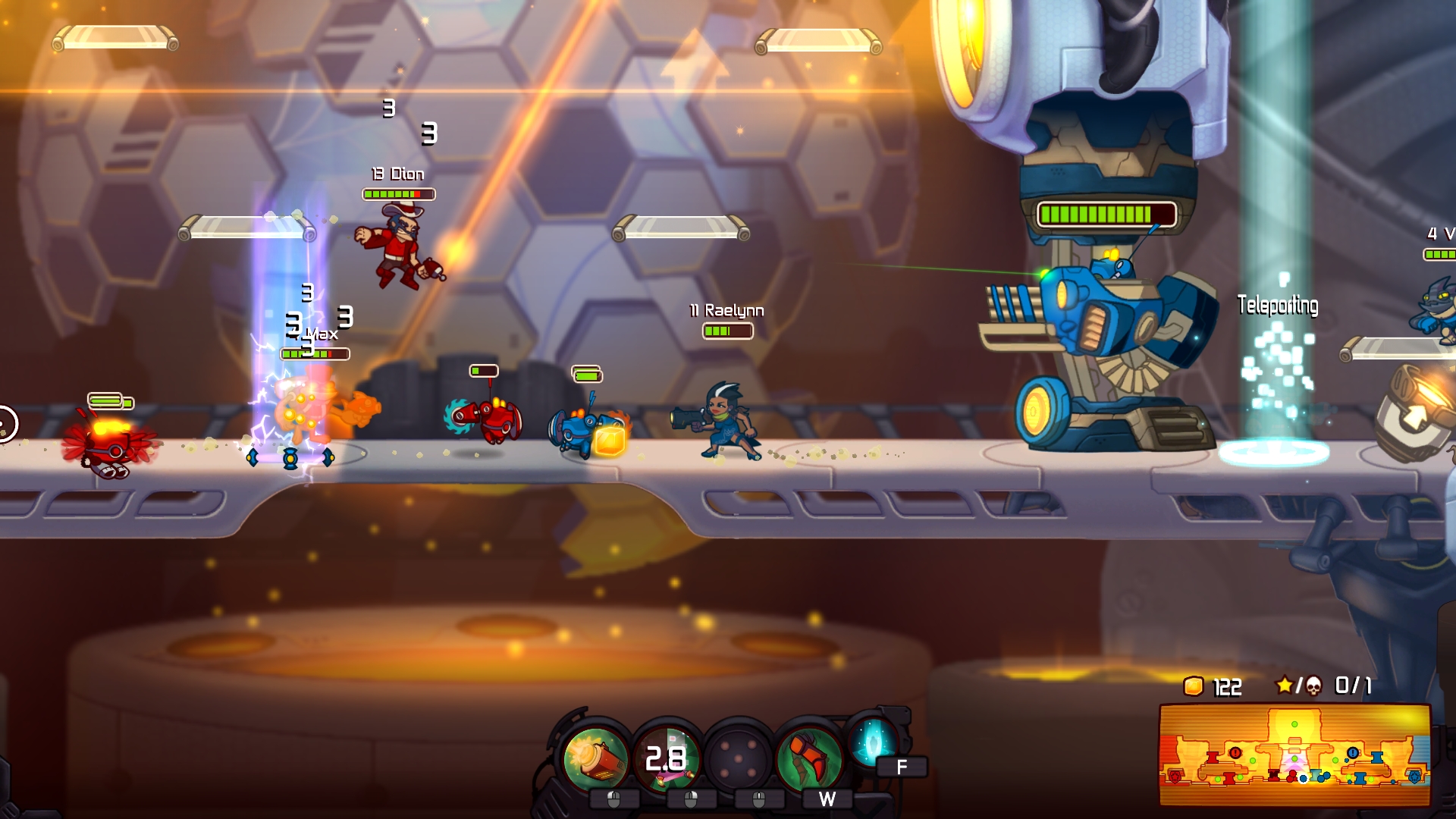 Those big machines in the image are your (or the enemy's) defensive turrets and those little guys are the team's NPC army.

One of the best things about this game is that it feels like Super Smash Bros. Melee, with its constant action and fast-moving pace. The way you move through the surrounding platforms makes a big difference in a fight.
Your skills have a low enough cooldown that you can use them more than once in a fight, but not so low that you can spam them. Most of your skills are aimed so good aiming is always important. Since you are always jumping around, this can be very hard, which has its benefits but also its problems.
The graphic effects are very good and overall the game feels balanced (more on this later).

The problem with this game its the lack of options, the size of your decision space is very small. Let's take a closer look at your skills :

As you can see, the player has 4 (apparent) skills. The F button is just a teleport to the base. I say apparent because the first one is your main attack so it really isn't a skill per se, the same with the W which is just your jump button.
So what do we have? Basically we have just two true skills (by true I mean skills with cooldown).
Let's compare this to League of Legends :

Here you have 4 character active skills, 1 passive skill and two general skills that you can choose before starting the level.
Oh and by the way, notice that you don't have a mana bar in Awesomenauts so that's one less thing to worry about which means one less variable in your tactic and strategic thinking.
Also, the passive skill is really important. The fact that it is passive means that you don't have to consider activating it during a fight (and don't be overwhelmed by the amount of choice you might have), but you must be always aware of its effects and how it can help you. It really helps to define a character. Once again, that is something that is missing from Awesomenauts.

Also, in Awesomenauts there are no buffs, and the items you can buy are very limited. You can only purchase skills that you don't have yet, or upgrade them in very linear and mostly indistinguishable way. 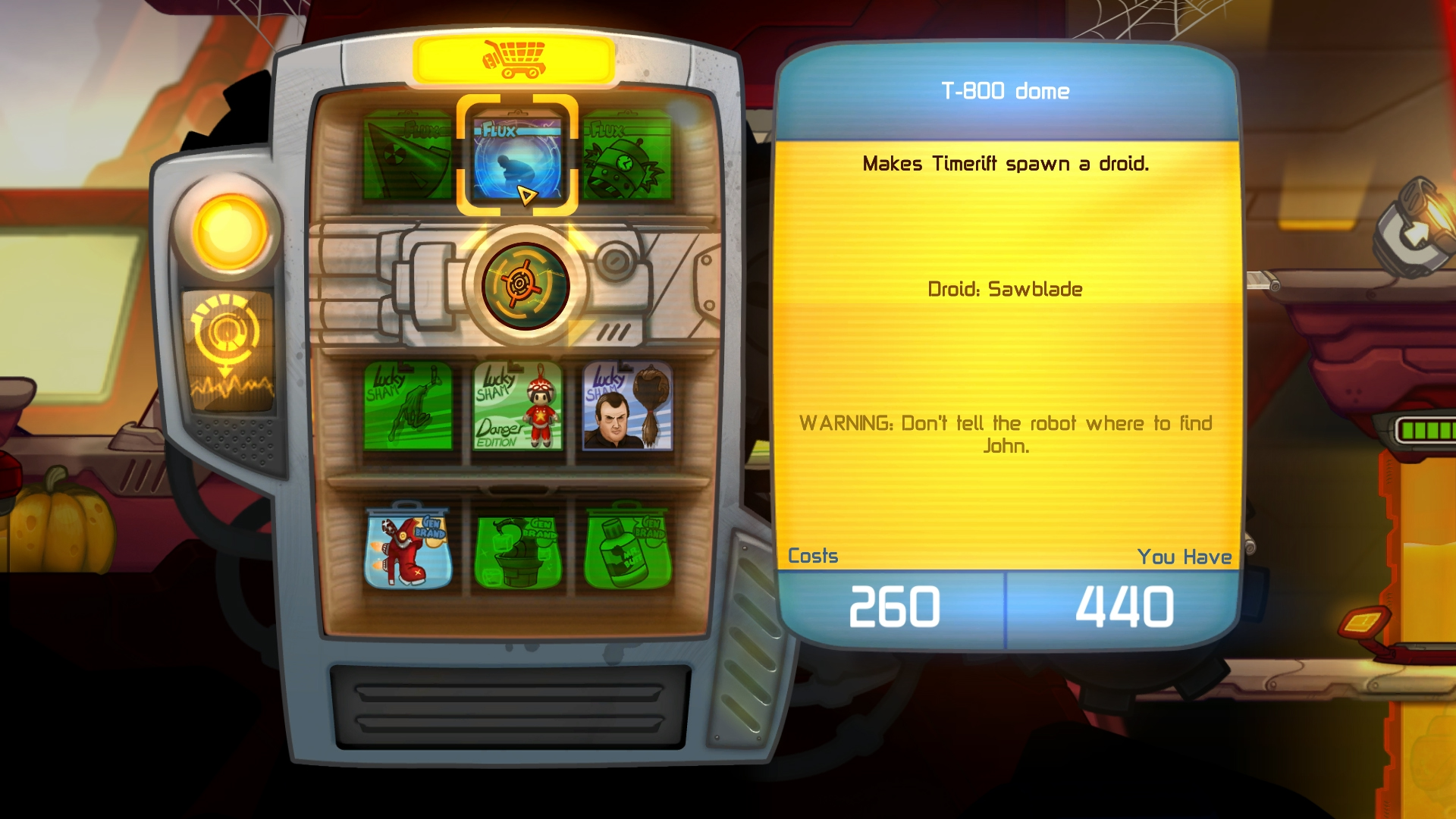 This means that you can't really form a long-term strategy since there aren't that many options, and they are very similar between them. For example, consider Voltar suicide drones. One upgrade increases the number of drones launched at the enemy, the other increases their damage and the other increases their attack speed. Those are just three different and mostly indistinguishable ways of enhancing its DPS (damage per second). Is there really any decision behind those three options?
Imagine if he had a passive skill that healed him X per hit. In that case perhaps the attack speed would be better. But if the attack speed's DPS increase was lower than its raw damage counterpart? Than you have a real decision.
And since you don't have any kind of space or some limit that prevent you from buying more, it's just an additive and mindless activity. You are just constantly upgrading your skills without having to consider removing anything you already bought (compare this to League of Legends inventory).

What does this all mean? It means that the player needs to consider very few variables during the level and doesn't have many long-term decisions to make.

This can be really bad for the player experience, because by acting in a limited decision and strategy space, the player feels like that there is not much to control, thus making its achievements feel unrewarding and making its failures a powerless circumstance.

Compare this with League of Legends or even Demon souls to leave the MOBA space for a bit. In those games when you fail, you know that you could have done something better, that perhaps your choices (both in-the-moment and long-term) were not the best and after that you immediately consider what went wrong and how can you turn it to your favor. This is all possible because you have a broad range of options and there are always more possibilities and combinations to try.

But Awesomenauts' linearity is also a trademark of its 4 scenarios. Lets see an example. Here is the outline of one of the worst in my opinion:

What is the problem here? There is only one lane:

That line represents that way your army takes to push the enemy's turret. This means that most of the time you will spend your time here:

This means that 90% of the time you will be fighting in the same conditions, and the possibilities of back stabs are or other kind of non-linear activity very limited due to the map constraints. You will end up with this movement pattern:

You go push the lane, then you move upwards to farm a bit, then return to the base to buy and upgrade stuff for pushing the lane again. It becomes boring pretty quickly.

One of the most awesome things in League of Legends is that constant fear of being killed by a enemy that slipped through the bushes unnoticed, thus making constant awareness of the map and team communication a very important skill. That fear is only possible because there is a lot of space to move, many paths to take and a great deal of complexity and hidden spots in those paths.

To be honest, I don't think that there is much to improve in this particular aspect due to it's 2D restrictive nature. But it is not impossible at all, just consider another one of Awesomenauts maps:

While not perfect either, this map presents more ambush opportunities by correctly using that middle space to switch between the top and bottom lanes.

Wrapping this up, I think that Awesomenauts is a fun game but its lack of depth prevent it from being as addictive as one would like.

The death of the HUD

Continuing my OSX CoreAnimation adventures I stumbled upon a really weird behaviour. On iOS you can add any layer…